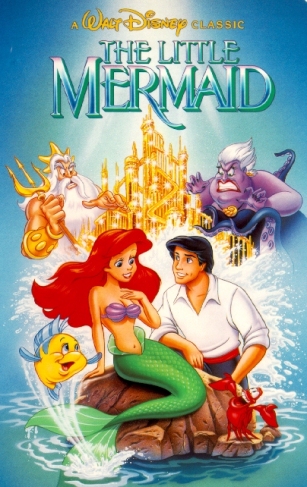 A self-hating fish-woman craves the excitement, material splendor, and external genitalia of the surface world. Upon discovering a ship full of humans, she spies on them, becomes obsessed with a prince, and trades her voice to Ursula the Sea Witch for three days worth of legs. To make the change permanent she needs to obtain the true kiss of love or her deed of ownership will be transferred from Prince Eric back unto Ursula.

Ursula manages to leverage this initial bargain to guilt the king into giving up his magic trident, dignity, and status as a vertebrate. General mayhem ensues, and then Prince Eric drives his manly harpoon into the Seahag’s rear. Ariel’s voice is snatched back, more mayhem, and Prince Eric takes control of the situation by ramming the jagged prow of his busted ship straight though Ursula’s backless dress.

The king returns to form and retrieves his trident, and so moved is he by the power of Eric’s thrusting he not only accepts him as a son-in-law, he also magically changes his teenage daughter’s species — forever — so she can marry a dude she’s known for a week. The end.

A fair reading of the subtext

If a sixteen year old becomes discontent with her privileged life, it is perfectly reasonable to risk the destruction and enslavement of her entire culture to monkey bar herself from a controlling royal father figure onto an unknown handsome surrogate living in a desirable foreign locale. Should one need to make bargains with dark forces to achieve this don’t worry about the inevitable fallout, or actually keeping your word, strong men will eventually thrust your troubles into submission and return your voice to you at their earliest convenience.

Lessons inherent to the story

Are they passably handsome?

Do they have a dog that they occasionally play with?

Can they wear two boots, at the same time, without undue discomfort?

Once the preceding have been answered to an acceptable degree, feel free to abandon your family, culture, species, and justifiable unease with the dark arts to facilitate a second chance encounter with said gentleman.

–If you are a moron hang out with bait fish and seagulls, you will feel smarter in comparison.

Lessons that I hope my daughter will extract
If you feel compelled to swap your voice for legs in a poorly negotiated dark bargain with the evilest person in town, go ahead. If you are honestly that stupid you probably had little worth saying in the first place. But when seller’s remorse sets in don’t expect me to give up my magical powers to bail you out; I have seven other singing daughters, I’ll be fine. If that upsets you, take up interpretive dance and choreograph a slanderous ballet about what a terrible father I am.

If you still want to abandon your culture and live in the human world, once that desire is rooted in empathy and perspective, I’ll give you three legs and a going away party. If your burning love cannot bear such prudence… feel free to live in the bathtub in your beloved’s guest house, but you need to understand that change without cost is performance, not growth, and I will not be a party to it.

[1]Given those were ocean going creatures in a freshwater river they almost certainly died as soon as that musical number was over.

Series concluded In Lesson from a Fantasy Princess: Sleeping Beauty

212 thoughts on “Lessons from a Fantasy Princess: The Little Mermaid”