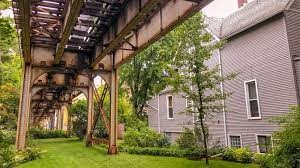 The boy’s house was indistinct, but fittingly seedy, simple and thick with old magic. A man’s place became him. Malcolm Hannish had watched for days and had taken measures to ensure Isaac was away long enough to have a proper conversation. In his hand Malcolm Hannish held a package he’d stolen from a porch down the street. He knocked thrice and waited. A small, tanned girl with short curly hair opened the door a crack, but left the chain on. Malcolm Hannish had been told she was May, person not month.

“I have a package for delivery,” said Malcolm Hannish.

May closed and locked the door and responded by speaking through the mail slot.

“Yeah, I can see that…but since you don’t have a clipboard I don’t need sign for it, so you can just put that shit on the porch and fuck off.” said May.

It had not occurred to Malcolm Hannish to acquire a clipboard. Guile had never been his strength as a hunter. He pressed on.

“This package is for Isaac Barrow, are you they?” Said Malcolm Hannish.

“ I don’t know who that is, and you are giving me serious raper vibes, so why don’t you deliver that package straight up the ass of whoever gave you this address. I already called the cops.” said May.

Malcolm Hannish was sure she had not. Those that lived on the fringe didn’t involve mundane authorities. Malcolm Hannish studied the protections on the door. They were robust, in a crude way, but designed more to contain that which was within, than to to bar entry. This ruse was thin, and Malcolm Hannish was not built for deception, so he kicked firmly at a spot below the knob. The lock burst along with the protections, and the door swung in, sending the girl sprawling to avoid being struck. She was quick and held a souvenir mini-bat from a local baseball team. Malcolm Hannish had never played, but enjoyed the cheap beer and sunshine of a day game. The girl swung it at his knees, Malcolm Hannish stomped the bat to the floor, pinning the girl’s hand beneath it.

“I have not come to harm you, I need only that you tell me of Isaac. Answer in a clear and timely fashion and this could be brief and relatively painless.” said Malcolm Hannish.

May kicked towards Malcolm Hannish and tried without success to dislodge her hand from under the bat. Little bones broke loudly with each attempt. She screamed.

“I have no fucking idea who that is.” said May.

Malcolm Hannish gestured about the room.

“You are in his house.” said Malcolm Hannish.

“This is my house you piece of shit, I got it at a police auction for a hundred grand. The last owner killed himself because he fucking sucked.”, said May.

Without taking his foot from the bat Malcom Hannish picked up a bill, addressed to Isaac Barrow, from the side table and presented it May “And this”

Malcolm Hannish felt a certain regard for her will but the lie was obvious. Kneeling down Malcom Hannish grabbed the back of the girls neck and lifted her off the floor, his thumb and forefinger close to touching on the other side. She struck at him with no effect.  Malcolm Hannish turned the girl to face a framed picture of Isaac and her prominently displayed on the fireplace mantle.

“And this?” said Malcom Hannish.

The words gurgled out.

“It came with the frame,” said May.

Malcolm Hannish could not tell if her defiance stemmed from loyalty or innate contrariness, but either way he tightened his grip and let himself be seen.

“Mayella Amadine, your line is minor but have known me in the past. Malcolm Hannish speaks to you now, tell me of Isaac the unwanted, the ineffable, the halfling that never should have been.” said Malcolm Hannish.

The young woman patted at his wrist and tried to speak. Malcolm Hannish released his grip and let her fall to the floor. May spoke in a horse whisper.

Hannish felt a flash of embarrassment, why had he worded it that way? It wasn’t part of the epithet, he’d just wanted a third thing.

“He’s not a Hobbit, he was born halfway between generations. “ said Malcom Hannish.

“ He is the least of the Children, unplanned, but still entirely human. Hobbits are fictional creatures. I will not continue discussing this.” said Malcom Hannish.

Malcolm Hannish was not in the habit of explaining himself but there was something in the girl’s way that had him unbalanced. There was too little fear and something calculated in her judgments.

“Yeah, well, if you are hunting down a guy that nobody wants, what does that say about you? You are not even man enough to square up, you have to beat on a chick a third your size…that doesn’t even know him! Great work, you are killing it. ” said May.

The work was demeaning and the girl’s contempt stung. Malcolm Hannish had been born to murder the world, not ask trifling questions in a run down house. Once it became clear that he could not engage Isaac directly the task should have been reassigned to someone of a lesser, but more applicable, skill set.

“I am fulfilling my obligation in the way that I have been instructed. I have been restrained, it seems I must make my point more firmly” said Malcolm Hannish.

The girl read his tone correctly and shifted tactics.

“When Isaac gets home you are fucked. He knows all kinds of ancient magics and shit and he’ll send you straight to hell.” said May.

“He knows very little and is currently occupied with the police,” said Malcom Hannish.

Malcolm Hannish drew his oldest knife and moved toward the girl. The girl scrambled back until she hit the wall. For all her sarcasm, she was still a being of flesh and breath. Malcolm Hannish wondered how much of her he could cut away and still have her be of use. Heavy footsteps, that had been silent before, creaked the last stair down. A being of gnarled root and thorn beneath a razor mawed pumpkin strode into the living room. He was wearing a terry cloth bathrobe, and a Happy Acres-Staff snapback hat perched on his massive orange head. The being pointed a gleaming axe at Malcolm Hannish.

“Such Manners. Would you step into another’s home without giving cause or asking permission” said Lyle.

Malcom Hannish had not expected the being, but it was not surprising that such a thing would be drawn into the boys artless web.

“I am not here for you, Boggart.” said Malcom Hannish

“Perhaps not, but you are here…and here is my home.” said Lyle.

This was not the time for semantic games, but Malcom Hannish had no choice but to engage.

“You are bound within, not resident.” said Malcolm Hannish.

The Boggart rose to as close to its full height as the ceiling allowed.

“I pay a full share of rent and a third of all bills…including water, even though I don’t do laundry, or shower, and Isaac takes two baths a day. By all measures this is my place and I will defend it as such. ” Said Lyle.

The Boggarts territorial concerns did not move Malcom Hannish. This was taking too long.

“Do you think such things matter?” said Malcom Hannish.

The Boggart began to pace.

“It adds up over time. I ordered low flow showerheads for him but he said he needs his tub time to think. Maybe put some thought into our three hundred dollars a month water bill, asshole.” said Lyle.

Malcolm Hannish couldn’t tell if it was a weirding from the house or the girl, but he felt he was not communicating effectively.

“ It does not matter that you see this as your home, I am here for the Child. Do you hold your captor in such regard that you would be destroyed for him?” said Malcolm Hannish.

The Boggart tilted its head side to side, considering the issue.

“If you cut Isaac’s throat in front of me I’d dance in his blood, but May has given me care and comfort during a difficult time. I’d consider us pals, even. And you are treating her quite unkindly.” said Lyle.

Malcolm Hannish looked to the girl on the floor, what was this thing between them?

“Do you have so much onus?” said Malcolm Hannish.

“A little, but we are also two seasons into the Gilmour Girls and it wouldn’t be the same without her snide observations.” Said Lyle.

May shook her head with disgust.

“She’s your daughter, not your bitchy bridesmaid. Don’t be so glib all the  time and set some fucking emotional boundaries.” said May.

The boggart motioned towards the girl.

“I think May is being a tad unfair towards Laurili there, but these are the sorts of discussions I can’t bear to lose.” said Lyle.

This was absurd, an insulting task had acquired a small amount of peril.

“Do you think yourself my equal?” asked Malcolm Hannish.

The Boggart held up it hands. Were it not for the axe the gesture would have been placating.

“In most places and in most ways, of course not. But here and now, and with the fine month I’ve had at work…I could levy a cost. But to what end? The girl’s knows nothing of value. Your aim was clearly to provoke and fluster, and this was more than sufficient. Honestly, a strongly worded letter might have sufficed, Isaac is not the cageist of adversaries. He’s been trying to keep our toaster out of the alley trash can for months and we still wake up to flaming refuse. The neighborhood cats do not respect him.”  Said Lyle.

Malcolm Hannish did not fear the Boggart, even in its place of powers it was not built for direct confrontation, but this was more than he had agreed to. More than the Children had a right to ask of him. And he was there to incite as much as learn. Decision made, Malcolm Hannish turned and walked away. The Boggart closed the door behind him.

“I am buying a fucking gun” said May.