The Sphinx was borne from the union of the no account snake torso-ed Goddess, Echidna,  and the deadbeat father of all monsters Typhon. Due to the eclectic genetics of her  parents her lovely human face was perched atop the body of a winged and ample bosomed lion, with a decorative snake tail on the back end. Note that she did not have a snakes tail, her tail was an entire Snake, attached to her lion butt.

The Sphinx’s early life is murky, but at some point she flew from her homeland of Ethiopia to take up residence on the coast near Athens, on a big rock by the road. Shunned by cliquish lions and smug people bodied humans the Sphinx grew embittered with the politics of her new home. Hungry and alone the Sphinx decided to channel the pain of her isolation into a cruel game of riddles that she would spring on passers by. The prize: go about your day. The punishment: Strangulation and then consumption. The historical records are unclear if she strangled them with her lions paws and ate them with her human mouth, or if she constricted the snake around their throats so it could then swallow them upwards into the Lion Butt. I imagine this being a source of contention for both ends.

She ran this grift for an unspecified period of time until Oedipus sauntered by and solved her riddle. Yes, that Oedipus. The Sphinx took it poorly and committed suicide by hurling herself off of the side off of the rock. Oedipus went on to have a terrible day. The end.

This is our most cosmopolitan monster to date: the myth is Greek, the Egyptians built a giant statue of her, and even in the Greek story the Sphinx came to Athens from Ethiopia. I’m going to call it Greek since the O-train’s tragic bio was my primary reference source for this piece. 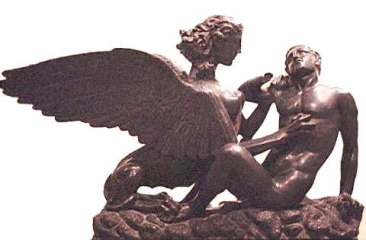 I would like to appeal to my friends right now: If you see a murderous giant lion, with wings and a Snake for a tail, crouched on top of a big rock, by a major road,  go back the way you came and tell everyone what you saw. Do not approach the riddling rock. I understand that you are confident in your reasoning abilities, but you owe it to your fellow travelers to alert the proper authorities of the navigational hazard.

Assuming I stumbled upon the Sphinx unaware, I suppose it is at least as dangerous as a sad lady-faced lion with a possibly poisonous snake tail, and I do find riddles obnoxious. It is lethal, but avoidable and depressing. Relative to other monsters I’d place the threat level somewhere between a hornets nest hanging from a public gazebo and a tipsy cougar at the bar that demands I guess her age but will take offense to any reasonable answer.

What does this say about Greece/Ethiopia/Egypt

Greece: By their usual mythological standards this is a Sunday school hymn. The Minotaur is far more indicative of their deep issues.

Egypt: You built a gigantic statue of a creature that was terrible at the one job that she had. The pride of your nation died rage quitting a trivia contest that she was the sole judge of, by hurling herself head first off a rock. Which couldn’t even have been that high, unless she was shouting threats and riddles down from an awkward distance.

Though, that could explain why no one solved it before Oedipus, who couldn’t even solve the riddle of “Am I fucking my own mother”, they couldn’t make out the details over the the incessant hissing of the snake tail. Oedipus wasn’t clever, he was just a good listener. Either way, odd choice for a statue.

Ethiopia: Ditching the Sphinx was your last bit of good luck. Fine work.

What is the lesson

If you are going to perform prepared material you can’t get rattled by a hostile audience. Have a backup plan for if things go poorly. Ask the crowd where they are from, or if they are on quest. Have several riddles prepared and if they guess the first one just move down the list until they miss. Or tell them that they got it wrong no matter what they answer. You are making the rules up anyways, why not stack the odds for the house. You don’t owe food flavors.