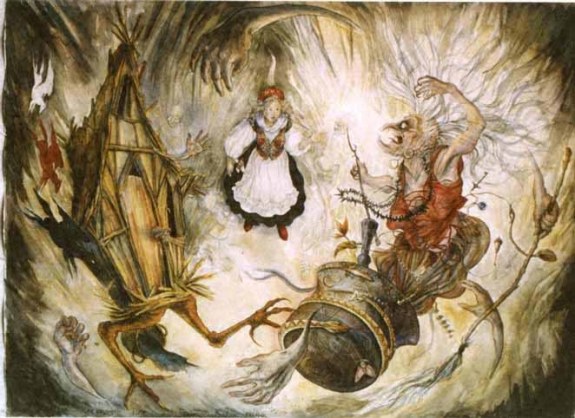 In our first examination of the terrible monsters of the world we sought to process the horrors of Insipid Sea Monsters, Foreboding Fae, and Goat Sucking cryptids. Each legend contained the vested fear, doubt, and thwarted values of the unwashed masses of each nation. Our deconstruction proved highly informative, and potentially libelous, but very little fear was evoked by the tepid collection of would be nightmares. Disappointing.

Still, our pursuit is too noble to be dissuaded by poor early returns. One simply needs reach into the psyche of more troubled nations. Let us begin, Round 2! 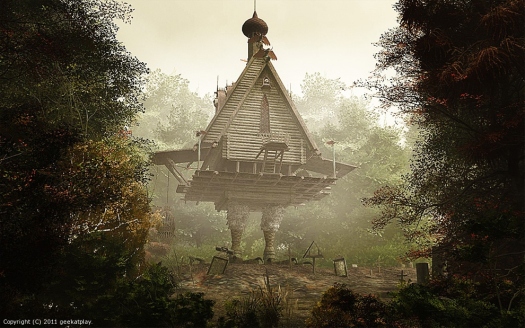 Baba Yaga, purloiner of children, devourer of men, the iron toothed witch that stalked the forests of pre Czarist Russia with the brutality of a slavic nightmare and the absurdity of a Monty Python animated short. Generations of careless children and foolish men wandered into the demonic crones clutches, driven into the woods by the promise of delicious pine sap and a reprieve from long depressing stories that go nowhere. No riddle, secret name, or act of kindness would stay her predation, her only game was hunger….and to play was to die.

I should mention that she lived in an ambulatory hut with giant chicken legs. Also, she occasionally flew around the forest in a huge mortar and pestle. Well, she flew around in the mortar, I assume she used the pestle to sort of paddle about. It’s hard to say. The natural question: Why would you acquire a Flying Mortar and Pestle when you already own a walking Chicken Hut? After hours examining the issue I have surmised the following: 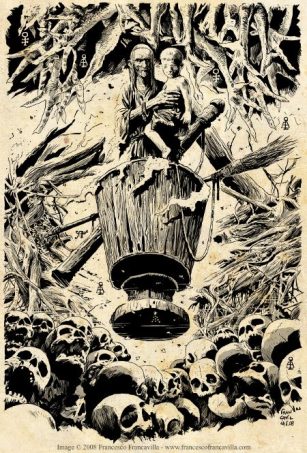 When I was five years old my mother worked as a nurse in the palliative care ward of an old folks home. In a traumatically under-thought holiday gesture they decided it would be nice to have the staff children join the dying, disease ravaged, octogenarians for a delightful Christmas party in the multipurpose room. I spent the evening cowering beneath the chip table, a dozen gnarled and bony hands reaching for my pliable cheeks, watching the movie version of “Annie” with one eye and the huge swaying neck goiter of a sedated Italian women with the other.

All of this is to say I find even regular old people deeply unsettling. Were I a Russian peasant child and my parents told me that the Iron toothed, magic, cannibalistic version of sick grandma was stalking the forest in a Croneburg-esque chicken hut: I would bury myself in the root cellar and pray the winters cold give me a clean death. So this one might actually be too effective.

What does this say about Russia: 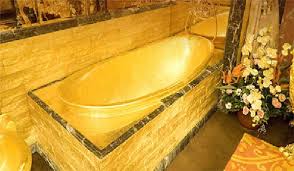 The Russian are as grim as they are unsubtle. Unsatisfied with the blasé terror of a child eating witch they kept adding spangle and flair until the myth groaned under the weight like an oligarch’s thrice plated golden bathtub. Gilding the chicken footed lily, as it were. The dark heart is there for sure, but the nation could use a strong editor and pleasant day out at the beach. 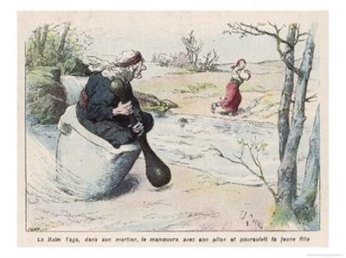 The hut, while implausible, is at least practical. If you are a cannibalistic serial killer having a mobile base of operations actually makes a lot of sense. But I have so many questions about the mortar and pestle.

-Did she find it randomly in the woods, already made?

-Did she trade the top half of her giant chicken for it?

– If she did make it from scratch was she planning on making a flying boat and part way through thought “Fuck it, why should I pay for a new boat when I already have a giant mortal and pestle for grinding up children. It’s basically the same thing and makes a much stronger statement.”

I am consumed by the unspoken back-story of this young, kitsch fan, Baba Yaga. When did things go so terribly wrong?